With our busy lifestyles, you need to have a good vehicle that would provide you with ease and comfort on your transportations. Can you imagine how late you’ll be at every meeting, friend gathering, or even special occasion if you’re using public transportation? Picking the perfect automobile to drive in the UAE isn’t that hard. As this place is filled with modern cars, there are thousands of places to rent your preferred car model. With this Ferrari F8 Spider, you can enjoy your road trip to the fullest on every ride. Despite how amazing it would present you; it would also fill your days with maximum comfort and joy.

The glorious thing about this Ferrari rental Dubai model is that it comes in a unique shape designed in a beautifully detailed way. On the other hand, it performs energetically and powerfully on the roads.

How much is a Ferrari F8 Spider?

There’s no getting away from the fact that it’s still a supercar. The new generation of cars does not force you to choose between performance and wind in your hair. It is powered by a powerful V-8 and is transmitted through a seven-speed automatic transmission with paddle shifters.

How much is an F8 Ferrari worth?

How many Ferrari F8 are there?

As reported by Data force, Ferrari sold 1,792 F8s in Europe in 2021, more than one third of its overall total of 5,072. It is reported that about 55 percent of orders were placed for F8 Tributo coupes, while about 45 percent were placed for Spiders.

While both models sport a 3.9L Trim-Turbo V8 engine, the F8 Tributo’s powertrain produces greater performance, and its specifications reflect that. In comparison to the previous version, it reaches a higher top speed of 211 mph and reaches 0-62 mph faster in 2.9 seconds versus 3.0 seconds.

How many F8 spiders were made?

A Data force report estimates that Ferrari sold 1,792 F8s in Europe in 2021, over one-third of the brand’s total of 5,072. It is estimated that about 55 percent of the orders for the F8 Tributo coupe were from the coupe, while about 45 percent of orders were from the spider.

It’s fair to say that orders for the Ferrari F8 Tributo and Spider have ceased – and that they may not resume, as a hybrid V6-powered successor is set to take their place.

Ferrari’s F8 Tributo was the successor of the legendary 488 GTB, which comes with the most powerful V8 engine the Italian automaker has ever offered. It’s an impressive accomplishment.

Is Ferrari F8 a supercar?

In terms of the lows, it’s not Ferrari’s best engine soundtrack, it’s difficult to see what’s behind, and the rear diffuser can drag on inclines. A Ferrari supercar through and through, the F8 is one of the best in the series, with dazzling looks and stellar performance.

Is the F8 faster than the pista?

Performance & Engineering: A tribute to F8. With 568 lb-ft of torque on both models, the 488 Pista and Tributo are powered by 3.9L twin-turbo V8 engines rated at 710 hp and 720 hp, respectively. Even though there is a slight difference in power between the models, both have an 0–60 mph time of 2.9 seconds and a top speed of 211 mph.

What Ferrari is replacing the F8?

As the replacement for the F8 Tributo, the 296 GTB is Ferrari’s first V6 PHEV (plug-in hybrid electric vehicle) and the mid-rear engine Berlinetta model.

Its appearance is similar to the special Ferrari F8 Tributo, which turns out to be a replacement for the 296 GTB. In spite of this, there are many design details and features that make the 296 GTB and F8 Tributo different from one another.

This is a replacement for Ferrari’s 488 Spider, which has been discontinued. It’s powered by a twin-turbocharged, 3.9-liter V8 engine that produces 710 horsepower and 568 pound-feet of torque. The motor is driven by an automatic transmission with seven gears and dual clutches.

How fast is the Ferrari F8 Spider?

Is the F8 Tributo a hybrid?

Even a brand such as Ferrari is required to downsize and electrify in order to meet stringent emissions regulations, so the plug-in hybrid V6 models will effectively replace the F8s.

Is the F8 Tributo limited?

We are pleased to present this limited-edition 2021 Ferrari F8 Tributo by German tuner Keyvany, now available through DuPont REGISTRY. As a result of the partnership between Keyvany and Creative Bespoke, quality and craftsmanship will be guaranteed

When did F8 Spider come out?

Ferrari launched the F8 Spider in 2019 as a follow-up to the 488 Spider, but with many enhancements from the extreme, track-oriented 488 Pista Spider. The F8 Spider is essentially wedged between the two.

The F8 is a Ferrari that puts performance and handling at the forefront, which makes it an extremely powerful machine. A 530kW powerplant and 770Nm torque plant deliver 530kW and 770Nm of power, respectively, at 8000 rpm and 3250 rpm, respectively. 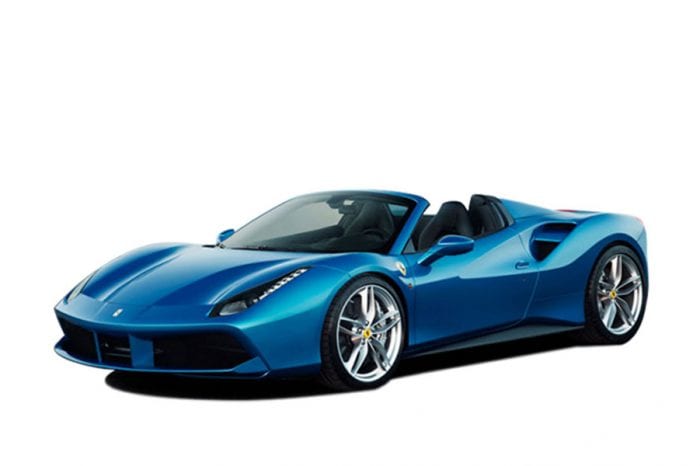 Ferrari F8 Spyder
Need Help? Chat with us
Start a Conversation
Hi! Click one of our member below to chat on Whatsapp
The team typically replies in a few minutes.
Spider Cars
Maher